Growing up with several siblings can make you feel like you have fallen through the cracks. This creates in you a desire to be special, a favorite of somebody’s, anybody’s. Thus, began the life pursuit of trying to be somebody’s favorite whatever. I tried it on as a favorite child, a favorite friend, a favorite singer. I even used to want to be one of God’s favorites. But, Praise God, He doesn’t have any favorites, and that is where healing from this malady began. I picked up on what may have been a similar struggle in the Apostle Peter’s life.

So when they had finished breakfast, Jesus said to Simon Peter,

This is a precious passage where I believe Jesus is restoring Peter from the three denials he committed, as Jesus stood being questioned before His death (John 18:25-27). By asking Peter if he loved him three times, Peter was able to be restored by saying three times. “Yes, Lord, I love you.” But I believe there is more going on here than just restoration.

The first time Jesus asks Peter if he loves Him has an extra phrase, “more than these.” Peter was a natural leader, which is seen as you watch him in several passages of Scripture, which I cannot expand on now. But one obvious indication of his leadership call, is prophesied by Jesus Himself.

And Jesus said to him,

“Blessed are you, Simon Barjona, because flesh and blood did not reveal this to you, but My Father who is in heaven. 18 I also say to you that you are Peter, and upon this rock I will build My church; and the gates of Hades will not overpower it.

Now perhaps I am taking liberties here but bear with me. Peter perhaps thought he must be a favorite of Jesus by being called the Rock and building the church on that rock. Perhaps we have thought more highly of ourselves through a similar call or position God has put us in.

I believe the fall of Peter, through the denial of Jesus, was something Jesus used to help Peter realize that God has no favorites. “Do you love me more than these?” is a question that God has shown me I was unconsciously asking and believing for quite a long time. I longed to be somebody’s favorite, so I tried to be God’s.

But the true freedom is found in belonging to a God who has no favorites in His Kingdom at all. He just has Beloveds. He loves us all equally, completely, perfectly. Perhaps God is having to show you that He has no favorites, just beloveds. He showed me through the same kind of fall that Peter went through. I was knocked off my high horse like the Apostle Paul in Acts 9. But it was the love of God that knocked me off that horse, and it was the love of God that left me in a suffering situation longer than I would have liked. It was the Love of God that told me I was not a favorite of His because He has none. I don’t try to be a favorite anymore. I don’t need to because like all the children of God, I am a favored one, a beloved one, a treasured one; as are you all, Dear Believers. Rest in His all-consuming, never-ending, completely restoring Love. 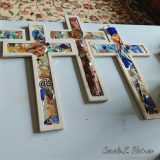 2 replies on “More than these”

Very well written young lady, I am older now and went through the same maladies as you did growing up. A rock is your heart that is your church were you come to realize that there is one Almighty God. Jesus was asking Peter you have denied and Almighty God 3 times, “Do you Love Me”. Almighty God uses men as messengers who understand the Words of the Father by asking to reveal what is in your heart to others. A rock is there is only one God and your build your temple, your church on that one rock. That is who pastors to you not mans church they have made a mess of things look around you and you run into, “I believe this”, instead of I love one Almighty God.