Pictures of Marines are all over the place on social media. Just as they should be since it is the birthday of the Marines Corps. Tomorrow is Veterans Day, and I know, there will be tons more posts of service men – as it should be.

I am thankful that my dad was both. He wrote a postcard home as he traveled to Parris Island. He was 26 years old, and he sounds every inch of it in this one sentence: “I’m sitting in Union Station waiting on the train, I’m heading for Parris Island Marine Corps. I’m an honest to goodness Marine.”

“Have I not commanded you? Be strong and courageous. Do not be frightened, and do not be dismayed, for the LORD your God is with you wherever you go.” ~ Joshua 1:9

He left behind a wife, a son, a dog, and a twinkle that would be born six years later. No easy communication devices. No cameras snapping a multitude of pictures. So there were letters……lots of letters. Mom and dad had a suitcase full. A suitcase that a youngster once opened and started reading.

I don’t think I sat down for a week.

Years later, Mom had me read a few of those letters to her when her body had started to break, and she developed macular degeneration. A few years after that, my brother and I decided that those treasured memories were theirs and not the world’s. I did keep a few of them though – especially the ones that had poetry my father wrote just for mom. Mom was a singer, so she would write song lyrics to him. She would tell him that all he had to do was listen, and he would hear her singing to him.

Pretty romantic stuff. No wonder the twinkle became a dream come true for them, and a pain-in-the-butt for her big brother.

“The LORD is my rock and my fortress and my deliverer; My God, my rock, in whom I take refuge; My shield and the horn of my salvation, my stronghold and my refuge” ~ Psalm 18:2

A while back I spent 100 Days writing from the little devotion booklet called “100 Rations”. Dad carried it with him to China and back home. His pocket-sized New Testament still sits on the book shelf behind my desk. He taught me to sing the Marine hymn almost as soon as I could talk. And while I haven’t been able to do it for years beyond memory, once upon a time, I could stand from a cross legged sitting position without even having to think about it.

Veterans are a blessing in this country. Men and women who are willing to sacrifice their time and comforts to protect and serve the rest of us – even unto death. It reminds me that Yeshua did the same thing – only He did it for the whole world.

Gratitude is an attitude. Everyday I need to be thankful for what Veterans have done for me. Thankful for what Christ did for me. I can almost hear my father’s voice reading the last sentence on the postcard: “So here we go. I miss you very much with lots of love and kisses. Boyd”

Love and kisses to all the Veterans and Marines out there tonight. Sweet dreams and thank you for blessing this country – each and every one of you who are reading this and those who are reading over my shoulder from a heavenly perch. 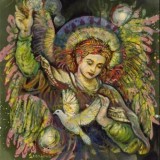 Where do you start to describe yourself? Mother Teresa said, "Each of us feels that we are just a drop in the ocean but the ocean would be less without that missing drop." I am a drop - just as polluted and pure as the rest of you reading this...a daughter of El, a wife, a mother/grandmother, a teacher, a student, a dreamer, a musician, an actress, a keeper of memories...and probably more or less in a variety of ways.